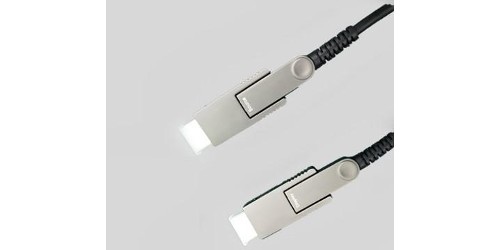 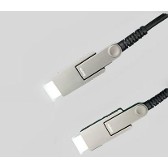 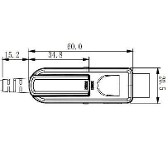 The Hall Technologies CHD-JAV4K-DE100 Javelin series 18Gbps 4K plenum-rated active fiber optic HDMI cables are engineered to be versatile to any application and installation. They support 18Gbps while maintaining a lightweight and flexible design.

The cable ships with detachable HDMI connectors so it is ready for connection to your video equipment, but users can purchase extra DVI detachable ends allowing for DVI-to-HDMI or DVI-to-DVI configurations using the same cable.

A pulling capsule with eyelet is provided in each package to aid with pulling. The capsule snaps onto the proprietary connector at the cable’s end. The plug-n-play cable requires no external power supply. Power is drawn from the 5v signal pin of the source HDMI output. The cable draws less than 0.25w of power from the source.

The Javelin™ 4K Plenum-rated cable can be used as a regular HDMI cable but without the worry of boosters or equalizers; being Plenum rated, also makes it possible to be used in any installation environment. Applications include home theater, conference rooms, schools, airports, hospitals, and more.