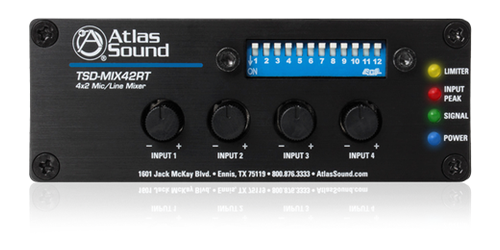 Atlas Sound introduces the TSD-MIX42RT: a 4x2 mic/line mixer. The TSD-MIX42RT is specially designed for environments in which there is paging over intercom or priority music override. This mixer enables users to perform priority paging via VOX trigger on input 1 that mutes the other inputs.

This mixer features 1 mic/balanced line input and 3 stereo 3.5mm inputs. The TSD-MIX42RT also boasts a variable output limiter, which protects the system from distortion. It is also fitted with an internal mic preamp to protect the sound quality and clarity while operating silently and discretely. The TSD-MIX42RT features a 12dB/octave high-pass filter at 125Hz on the mic input. This prevents bass rumble and low-frequency feedback.

This mixer can be used alongside amplifiers, with digital signage, and are ideal fits in meeting rooms and luxury suits alike. The TSD-MIX42RT can also be used alongside the WPD-MIX42RT Decora-style wall plate, which features remote activation capabilities. The WPD wall plate is a single-gang size outlet that enables users to select audio sources.

This mixer requires a separately purchased power supply, however, multiple TSD units can be powered via a single power supply. Other key features of the TSD-MIX42RT include the following: