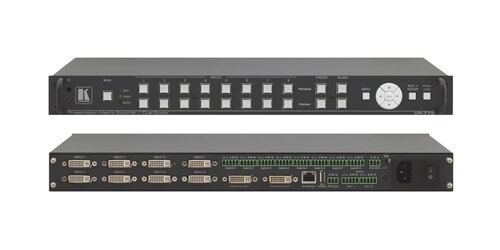 Featuring the Kramer 8-input 4K30 UHD DVI VP-772 ProScale Presentation Switcher/Dual Scaler with special effect transitions. This device was designed for the rental, staging, and live event market where a dual-scaler is need. It features DVI-U inputs (including analog, DVI and HDMI support) and balanced stereo audio. The unit has the ability to scale and process the selected video and audio inputs, and outputs to two independent DVI−I outputs (program and preview) together with two balanced stereo audio outputs. PixPerfect Scaling Technology handles the scaling responsibilities of this unit, which is Kramer's extremely high performance, state-of-the-art scaling technology that uses extensive high-quality pull down and de-interlacing algorithms, with full up/down scaling of the video outputs. Beyond rental and staging applications this unit would be a great add benefit for us in projection systems in conference rooms, boardrooms, auditoriums in addition to any application where there is a need for high-quality conversion and switching of multiple and different video signals to graphical data signals for projection purposes.

K–IIT XL Picture–in–Picture Image Insertion Technology uses an Ultra stable picture–in–picture, picture–and–picture, and split screen capability. Any video source can be inserted into or positioned next to any other video source with full window positioning and sizing controls. Seamless video switching is another main feature of the VP-772 that provides cuts or built-in special effects transitions, including horizontal, vertical, diagonal circle, chess-board wipes, cross fading and more. For "live" seamless transitions the dual scalers allow transitions from one source to another with two independent outputs: a "Preview Out" and a "Program Out". The Preview output, including an OSD (On Screen Display) menu for making adjustments is used for determining how the scaled output looks before displaying live during a presentation. In addition there are 8 Preview input buttons for switching a selected input to the preview output and 8 program input buttons for switching a selected input to the program output.

There are an array of control options when using the VP-772, which include: Front panel buttons, Ethernet, IR remote control transmitter, RS–485 (allowing future optional T–bar control), RS–232 serial commands transmitted by a touch screen system, PC, or other serial controller. With On–Screen Display (OSD) for easy setup and adjustment, accessible via the IR remote control and via the front–panel button and firmware upgrading via USB (through a memory stick) and Ethernet.