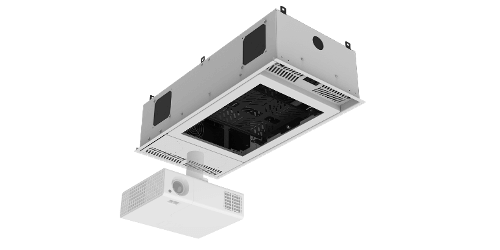 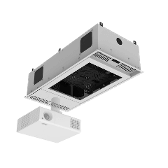 The CR212P ceiling-mounted equipment rack allows electronic equipment to be conveniently installed out of sight, in the ceiling plenum. The CR Series provides a space-saving solution while also being aesthetically discrete, blending in with common drop-ceiling tile designs. They permit equipment to be securely mounted above the ceiling in a sealed UL plenum-rated cabinet with an easy access door. The door assembly has an open frame design so the installer can place a ceiling tile into the frame and better conceal the entire ceiling rack. The ceiling tile cut-out is safely held in place by retainer tabs, locking it to the frame. To open the door, two retention thumb screws can be removed, and the door has attached safety cables to protect against injury.The CR212P provides 2RU with a 9.25" half-width to accommodate compact half-rack equipment. The enclosure is 1' x 2' to fit a half space of a standard ceiling tile grid. As an option, a rack rail kit can be purchased for installing rack mount installable electronic equipment. The optional CR212RR rack rail provides two rack units (2RU)AmbiTILT - Easily load and service equipmentAn AtlasIED advantage is the AmbiTILT mechanism with three methods to easily load and service equipment. For the first method, the shelf system has quick-release cane bolts. The two-(2) front cane bolts can be released and the entire shelf will tilt down towards the front. The shelf assembly is held in place by two safety cables and the two rear cane bolts. Being an ambidextrous design, the two-(2) rear cane bolts can be released in the same fashion and the rear section of the shelf will tilt downward for quick access to equipments rear connectors. The third option allows an integrator to completely remove the entire shelf system by releasing the front and rear cane bolts followed by releasing the two safety cables via the quick-release locking pins.Precision Projector Pole AdapterThe two different sizes also provide a choice for an integrated pole adapter for easily mounting a projector underneath from a standard 11/2" threaded pole. To ensure the projector properly aligns to the center of the projection screen, AtlasIED provides the precision system. In the 1' x 2' enclosures, three knockout choices are provided so the installer can precisely choose which knockout best aligns the projector to the center of the projection screen. Once chosen, the installer opens the chosen hole and installs the provided pole plate adapter. Now, it is ready to thread in the pole and mount the projector. For the 2' x 2' enclosure, there are five precision knockout locations provided. To ensure the pole is safely secured in place, the CR Series incorporates a locking screw mechanism.Integrated AC Power Pack with PowerAWAKE Auto On-OffThe CR212P incorporates an integrated UL-listed power pack for powering the mounted electronic devices and data projector. There are five-(5) electrical outlets provided with standard 15 Amp Edison-style plugs. Four-(4) electrical outlets are located inside the cabinet and one-(1) outlet faces down and remains exposed when the door is shut. This allows a projector to be easily powered.The CR212P's power pack has an AtlasIED innovation called PowerAWAKE. This provides a sensing circuit that automatically turns power on or off to devices inside the cabinet. This extends their life span and can effortlessly save electricity. The CR212Ps exposed outlet is constantly on and incorporates a sensing circuit. When a projector is plugged into this outlet, and powered on by a user with a remote, the PowerAWAKE circuit will detect the electrical current draw and automatically turn on the rest of the outlets and the fan assembly. Now all devices are powered on or off by the projector remote. The PowerAWAKE pack has sensing circuits in two outlets that always stay on. They are the exposed outlet and the first outlet inside the cabinet. The remaining three outlets are toggled automatically by the PowerAWAKE circuit.The power supplies incorporate a whisper quiet fan assembly (24dBSPL A-weighted) for equipment cooling.Multiple Punch-Outs for Electrical and A/V ConnectorsThe CR212P is built "Texas Tough" in AtlasIED's Texas-based manufacturing facility. Proudly made in America and built to last, 18AWG powder coated metal provides a strong and rigid assembly with decades of operational use. Another AtlasIED advantage, the cabinet side panels include four-(4) removable 4" square standard cover plates. There are two per side and each side has one cover plate with a single 11/2" knockout and the other plate with two double knockouts for 1/2" or 3/4" conduit connection. The provided cover plates can be replaced with an installer-provided custom plate with connectors such as an Ethernet jack, HDMI jack, NL4, XLR, RCA connectors and much more.Multiple Installation Mounting OptionsAtlasIED provides three mounting methods.The first method is by suspension from threaded rod via AtlasIEDs optional threaded rod rail kit. The kit includes two mounting bars and hardware for attachment to the enclosure. The bars provide holes to attach threaded rods with bolts supplied by a qualified installer. This is the preferred method as it keeps the whole assembly the most stable. Note: The threaded rod, bolts, and clamps are not included in the kit, they are sold separately. CR212TRK - For use in the CR212P Series cabinetsThe second method is by suspension cables via AtlasIEDs optional cable mounting kit. The kit includes four-(4) aircraft cables, thimbles, and crimp sleeves. The kit also includes four-(4) quick adjustment cable locks allowing quick cable length adjustments and cabinet leveling. CR2CK - Works for all models.The last method is using third party mounting accessories. The cabinet comes with extruded mounting ears for attachment points.