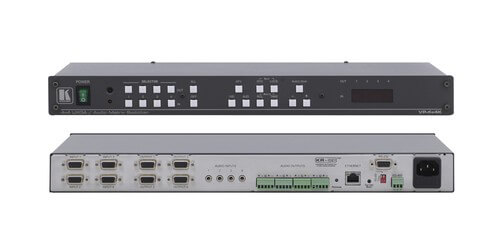 The VP-4x4K from Kramer is a high-quality matrix switcher for computer graphics video signals, with resolutions that exceed UXGA, and balanced stereo audio signals. This device has the ability to route any or all of the inputs to any or all of the outputs simultaneously. It is HDTV compatible and has a high bandwidth of 400MHz. Kramer's Kr-isp Advanced Sync Processing ensures compatibility with a wide range of computers (even if sync level is too low) by restoring the sync signal waveform. The ideal uses for the VP-4x4K are in professional display systems requiring true 4x4 matrix operation, and is also great in multimedia/presentation source and acceptor selection applications. You also however, can use this device in remote monitoring of computer activity in schools and business, where security and content protection is needed.

Other features of the VP-4x4K include delayed switching which is available up to a 3.5s (user selectable) delay for seamless switching when switching between non-genlocked sources. An audio break away switching feature. All/Off controls send one input to all outputs, can disconnect all outputs, or you can turn off individual outputs as needed. A "take button" can execute multiple switches at the same time, and memory locations can store multiple switches as presets to be recalled and executed as needed. This device also has a front-panel control lockout feature to prevent unwanted tampering. Additionally  there is a active input indication reporting feature where each input button on the front panel automatically lights up when the unit detects a video signal on that input, or when an input is selected for switching, the button changes to a different color to indicate it is the active input.