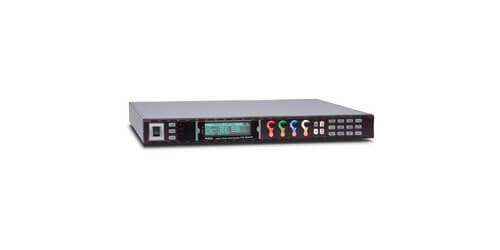 The FA-9500 Multi-Purpose Signal Processor 3G/HD/SD from FOR-A is a amazing all in one signal processing device that features two 3G-SDI inputs, alongside a variety of other video and audio outputs. This unit is suitable for both 60Hz and 50Hz regions, with the signal processor supporting emerging video formats via the 3G-SDI inpouts and outputs, making this device a future proofed link in your chain of signaling equipment and devices. Additionally the FA-9500 acts as an up/down converter as well as a cross converter with automatic video optimizing capabilities. This unitThe unit supports 3G-SDI, HD/SD-SDI, and analog composite I/O. In addition to its functionality as a frame synchronizer. It can convert many types of video and audio signals. Numerous additional functions include, as options, analog component I/O, logo generator, Dolby E encoder/decoder. By combining these varied options, a single unit can provide optimal functionality for all video production scenes, including that for transmission, line production, news reporting, production, editing and distribution. As long as you have an FA-9500, you won't need any other piece of peripheral video equipment. -- Standard with the FA-9500 are three video inputs: two 3G/HD/SD-SDI inputs, and one analog composite input. The 3G-SDI I/O makes possible full processing of 3Gb/s signals such as 1080p. You can add up to two additional inputs, allowing you to choose one channel from the total of five inputs. The two SDI channels are synchronously coupled independently, meaning that during switch-over there is no "shock" to either the video or audio. Each SDI input has error detection, which enables the system to effect a seamless switch to the other channel when an error is detected or a signal is lost. Input signals pass through a converter circuit of two internal channels and get output as SDI and analog component signals. Each channel has two distributed outputs. SDI and analog composite inputs all enjoy an I/O bypass function in case power is cut.