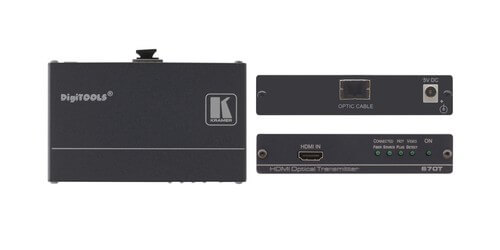 Satisfaction Guaranteed!
MSRP: $1,495.00
Our Price: $1,196.00
Request a Quote
Top 670T Specifications
"Online ordering was very easy and the automated emails kept me up to date on status of the order until delivery"

The 670T is a high−performance fiber optic transmitter for 4K UHD HDMI signals. The unit converts an HDMI signal to light pulses that it transmits over one single fiber optic cable to the 670R receiver that converts them back to a 4K UHD HDMI signal. With a potential system range of 5570' for 1080p and 1970' for 4K, this device when used with the 670T transmitter, is primarily found in long range multimedia distribution applications for cinemas, stores, and entertainment centers for example. It would also be a great addition in video production and broadcast facilities, retail stores, point of sale systems, and would even work great in high-end home theater applications.

This transmitter comes with a lot of built-in features and abilities, the main ones being: 4K resolutions, HDTV compatibility and HDCP compliance, and its extended range capabilities of up to 5570' at 1080p. HDMI support includes deep color, x.v.Color, Lip Sync, HDMI uncompressed audio channels, Dolby TrueHD, DTS-HD, and CEC. Signal transmission for receiver works by transmitting four TMDS video channels as well as one low-speed channel for passing HDCP, EDID, and a Hot Plug Detect (HPD) signal over one multi-mode fiber cable. Multi-mode fiber optic OM3 cable with SC connectors is the type of cable this device uses. EDID PassThru is also a handy feature this unit supports, it works by passing the EDID signal between the source, a dvd/Bluray player for example, and display such a flat screen LCD.

With 4K resolutions (when connected to 670RN) and up to 3.5Gbps data transfer rates, the 670RN and 670T would be an ideal solution to any situation requiring a fast paced high-quality signal over extended ranges from a source to a display, and it has 3D pass through abilities. Comes with a power supply, bracket installation kit, and is backed by a 7 year warranty from Kramer.