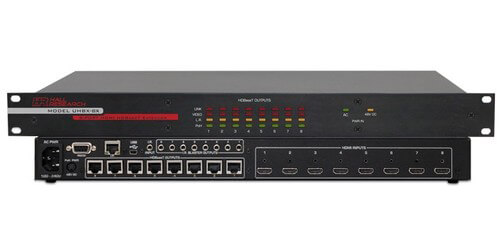 The Hall Research UHBX-8X is an 8 HDMI input and 8 HDBaseT output transmitter, it also can issue RS-232 and IR commands up to 500' for 1080P and 330' for 4K to a compatible receiver. The transmitter supports HDCP, 3D, Deep Color, CEC, and 4K resolutions for the latest in technology, all in a compact 1RU rack mountable chassis.  Set up and maintaining is easy since LED indicators on the front panel show Link Status, HDCP status, Long Reach and Power for each of the 4 outputs.

The UHBX-8X provides both IP (Ethernet), and RS-232 ports for control. Using these ports the user can address and send RS-232 or IR commands to any of the receivers to control the remote display. IR signals can also be extended in both directions. Besides being able to create IR commands by itself (via RS-232 or IP control ports), the UHBX-8X provides a jack for an IR detector cable. The IR received by the detector can be routed to any one or combination of outputs. 4 separate IR emitter ports are also provided on the rear of the UHBX-8X which can be used if a user connects IR detectors at each remote location.