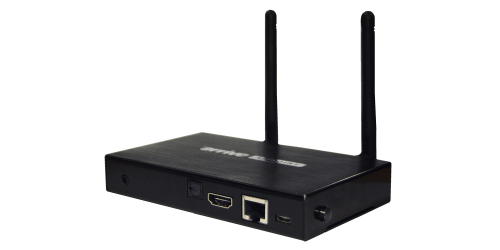 The Arrive AAP-2011-BYMG AirPoint 2.0 Huddle Room Wireless Media Gateway that supports Apple AirPlay, WiFi Miracast and Intel WiDi on the same integrated platform. Now in its second generation this AirPoint device provides a wireless screen mirroring for BYOD presentations and does not require dongles or other devices to be connected to the users WIFI capable presentation device. Equally it has a toggle option to go between 2.4 and 5Ghz frequencies, and offers a standalone solution in the fact that there is no extra requirement to download software on personal devices since it is embedded with the Arrive AirPoint 2.0 software.

All of these capabilities come packaged in one user friendly device interface that can simply be placed discreetly on a table, credenza or shelf. Delivering amazingly powerful and efficient in-room wireless collaboration experience for huddle rooms, small meeting rooms, classrooms, and hotel guest rooms.